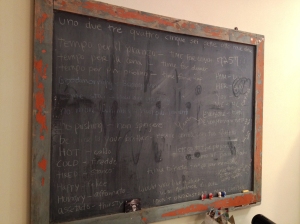 We’ve made it through about half our trip in Italy. We’re slowly getting used to the culture, schedule and the language. We’ve been looking up phrases on our phone when we want to ask a question in a shop and we’ve been making notecards at home but that’s as far as we’ve come. Some parts of the language are really close to Spanish so I keep accidentally saying Spanish words! At Nico’s wedding I said “Gracias” to a waiter instead of “Grazie”. Oh man. The hardest thing we’ve had to overcome about communicating with people here is to come to terms with going into a store and realizing that we’re going to make a fool of ourselves trying to speak to them in Italian. Back home you could assess the situation and decide how you were going to say something and how you wanted it to come across. Here we only know one way to say something and we know that we sound like a caveman with our broken sentences. But I guess it’s good to learn that lesson and get out of your comfort zone once in a while.

If we would’ve had more time before this trip I definitely would have started Italian lessons. I feel that if we knew more coming here then we could’ve really learned the language since we are immersed in it daily.

We really have no gauge of how much of the language the kids are picking up. We ask Stone to tell us what he learned at school and he still repeats the one phrase we taught him to say if he had to go to the bathroom. One thing we’ve noticed is that he’s starting to babble a lot or rhyme a string of words. We’re wondering if he’s trying to repeat what he’s hearing at school. One day the teacher, who can sort of speak English, told me she thinks Stone is understanding some Italian. If they play a song with hand motions he will be able to follow along and do the appropriate one.

Crosby on the other hand is still refusing to speak too much in English or Italian. He’s a babbling crazy man though so maybe he’s babbling some Italian words in there too! Crosby really only gets the Italian influence in passerbys outside who comment on what a little blondie he is or if I put on Cartoons at home. We’re trying to say as many words at home as we can remember. Hopefully Crosby won’t learn our really poorly constructed Italian sentences.

We still have about half our trip left so who knows how much we’ll learn or at least attempt to learn.

One more funny tidbit that you might get a kick out of… Did you know that in Italy Maters name is Cricketto! That’s crazy!