We finally made it on our first weekend trip. The weekend before we finally found the Carpi train station so we decided this weekend we’d actually get on a train and try to make it to Modena, a bigger city close to Carpi.

We ventured out on Saturday morning with the plan that we’d go to the train station and if we got on a train that would be fine and if there wasn’t a train then we’d just walk around Carpi again. We got to the train station at 9:55 and there was a train leaving at 10:00. I think a train must leave at the top of every hour and then returning from Modena to Carpi it must leave on every half past the hour. At least that’s what we think. We quickly paid (4 Euros, the kids were free) and got on the only train there hoping it was the one going to Modena. Well, it was and it only took about 15 minutes to reach our destination. 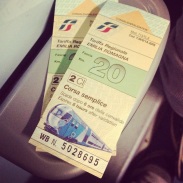 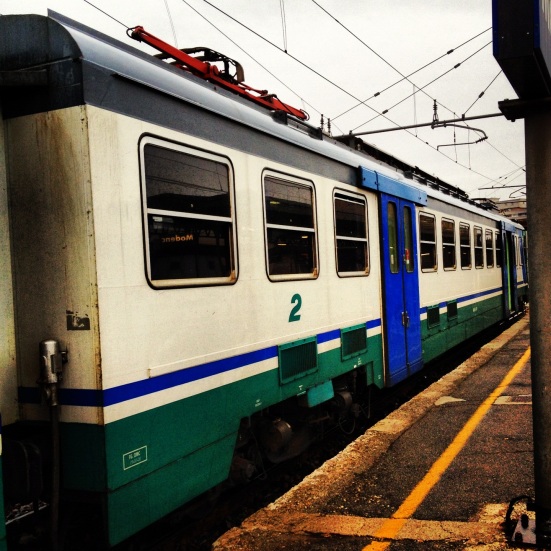 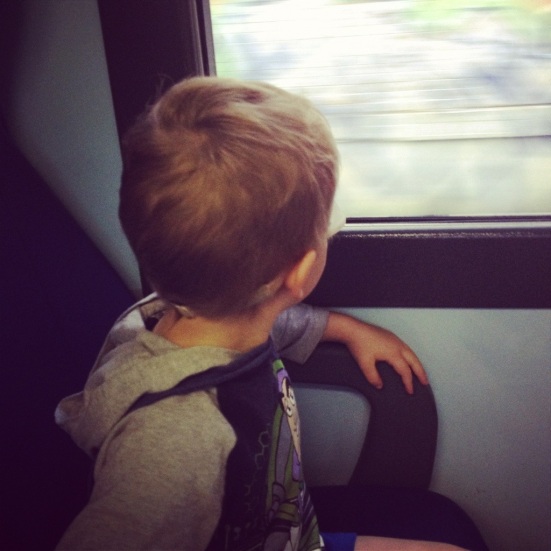 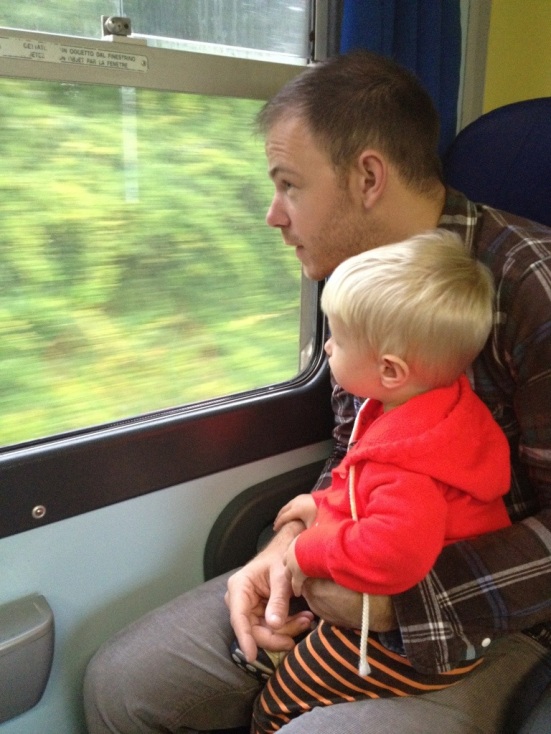 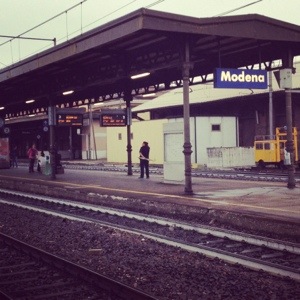 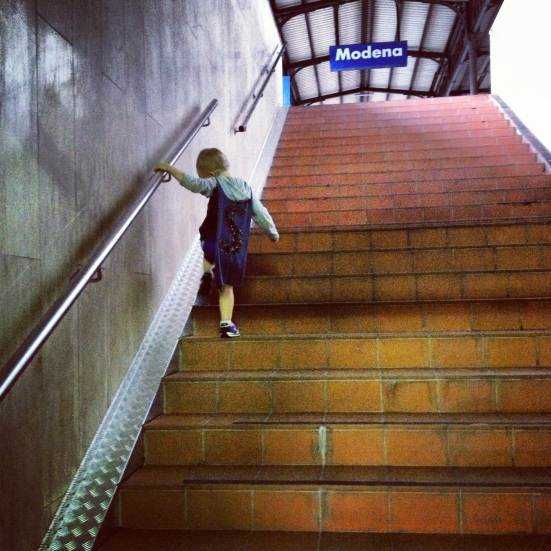 We got to Modena and had no clue where we were going so we just started walking. We stopped at a coffee shop and got an espresso and a cappuccino and a little treat for the kiddos. We are having a hard time with the fact that in Italy even at a coffee shop you sit down and they come get your order. We keep going inside and ordering and then they say that they’re coming out to us. 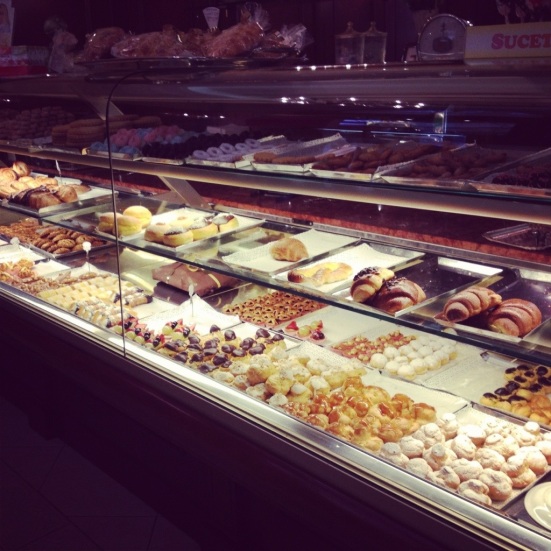 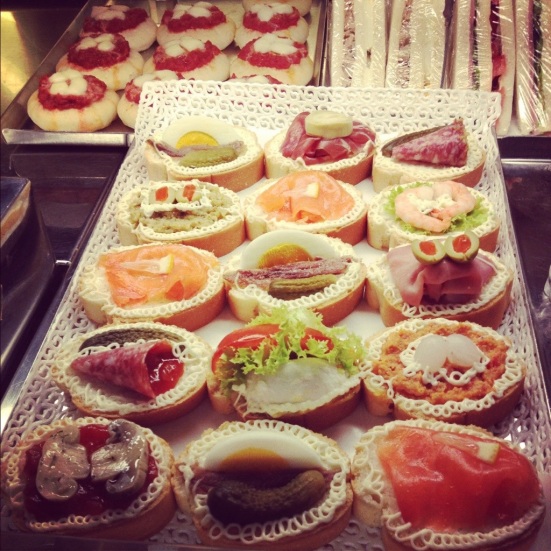 So, we basically slammed our coffee since even though we got the kids a treat they were ready to move. The waiter must have been like…what?! They drank their coffee in a minute when most people are lounging in the coffee bar enjoying their day. Well, off we went. We didn’t really know where we were headed so we did a quick google search of things to do in Modena and one thing that kept popping up was the indoor market. We had our destination. On the way to the market we stumbled across…yep you guessed it…a playground. It was drizzly and rainy too so we weren’t sure if we were going to stop but we did. Luckily Stone was wearing his cape from his 2nd birthday party and we used that to dry off the slide. We all had a great time stretching our legs and burning off some energy. 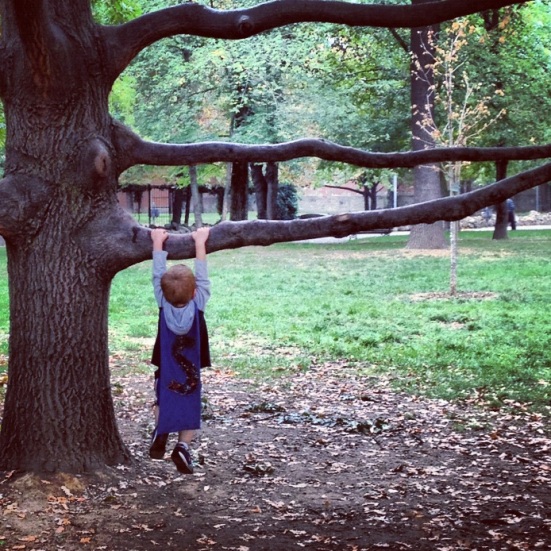 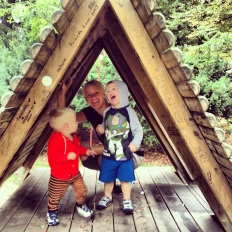 Then onto the Market. We came across an outdoor market with about 10 vendors outside and thought, “Was this the market everyone was talking about?” After we walked through that outdoor market we kept wandering around and came across a little cafe where we were going to stop for a juice for the kids and a beer for us. Well, it was like finding this place was meant to be. There was a little area with tables gated outside that no one was sitting at because it was raining. The rain stopped when we got there and the kids had a blast running back and forth from fence to fence and they actually played nicely together. It’s unheard of that we’re actually able to sit at a table together and look at the scenery and just relax…it was an amazing break that we both needed. 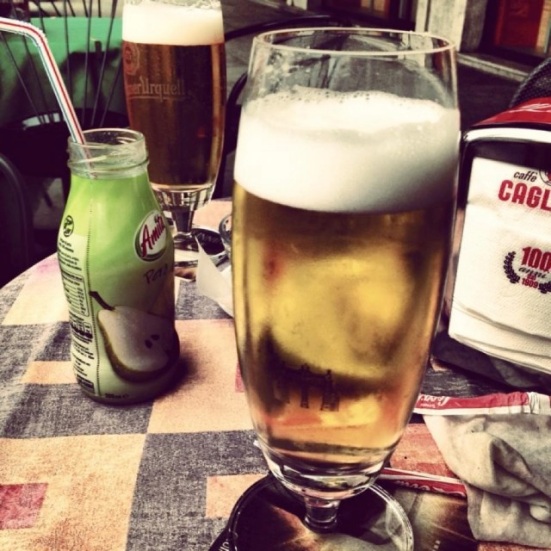 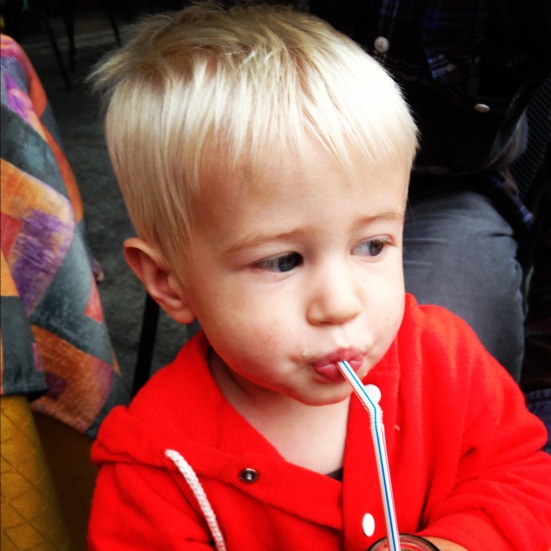 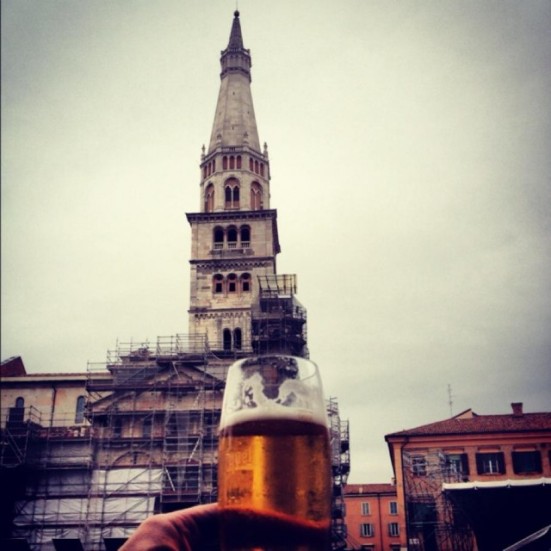 Once we were done we started walking around again. That’s when we found the real indoor market. It was actually right next to the other market but we walked around for a while till we found it…you can actually see the entrance from the first market we were at. Whoops! The indoor market is incredible. Every fresh fruit, veggie, fish, meat or cheese you could possibly want was in there. There were street performers, a face painter and a man on stilts walking around entertaining the crowds. We walked around in awe, not sure of what to buy since there was so much, but we did walk away with Italian honey, salami and sun-dried tomatoes. 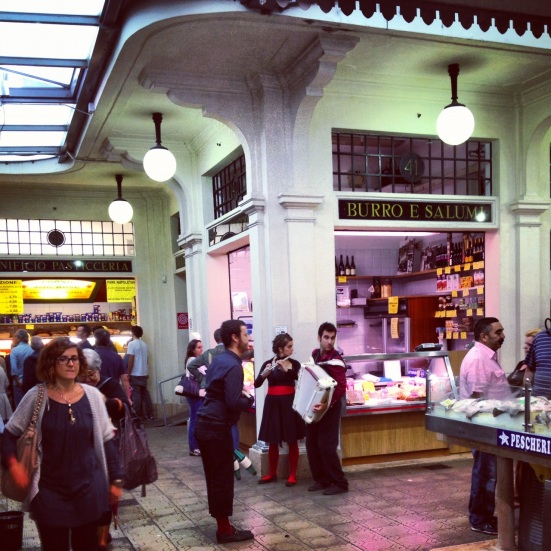 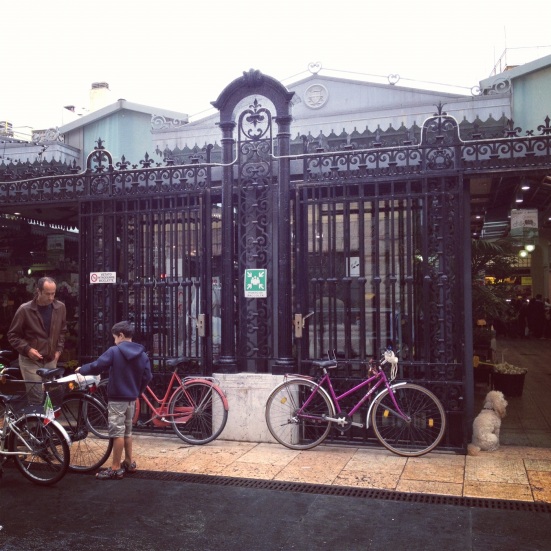 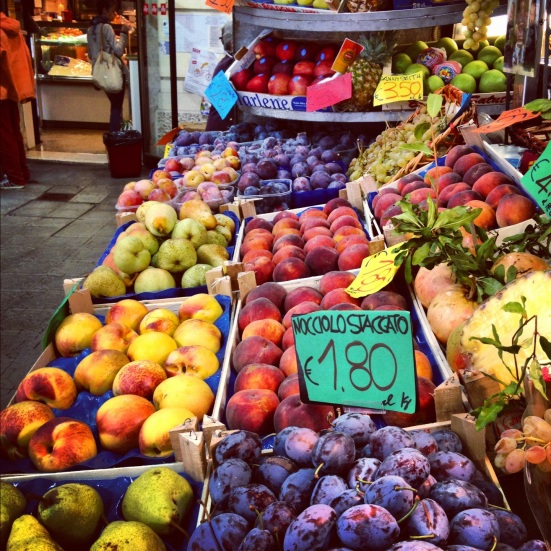 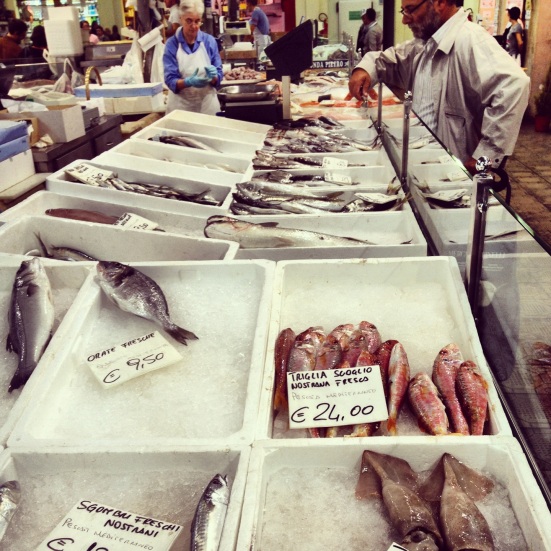 After the market we heard music coming from a little ways away so we headed towards it. When we found it, it was a stage and the bands were doing their sound check for their evening concert. Even thought the concert hadn’t started Stone still had a fun time dancing and holding up his umbrella in the piazza. Little Crosby had fallen asleep in his stroller and missed the whole thing. 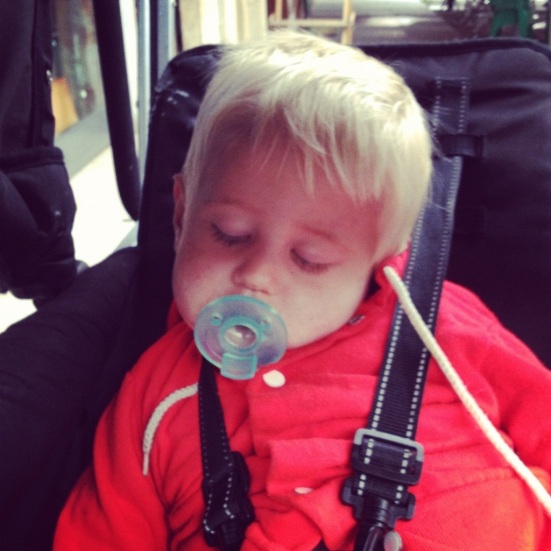 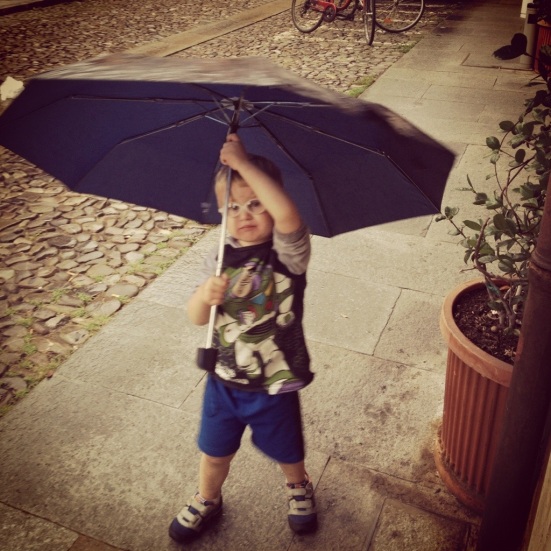 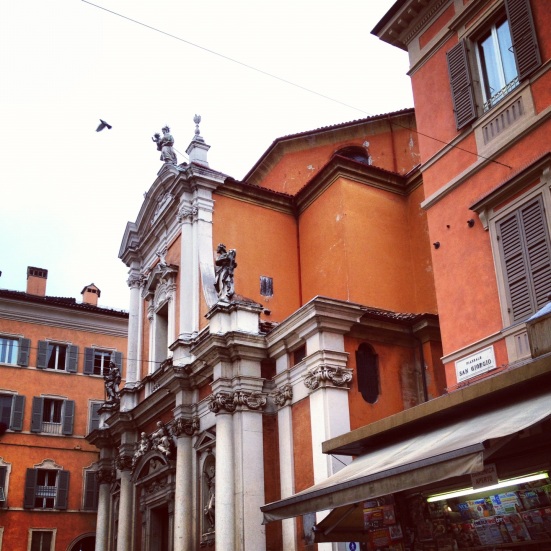 Jesse had downloaded the new operating system for his Iphone the day before so we were able to face time Liz’s family and give them a tour of the square and walk them through the market. People probably thought “Who are those crazy Americans?” It was still a fun time sharing our experience with them.

We are definitely going to have to make it back to Modena. The next time we’re going to have some ideas on things we need to buy so we’re not walking around dumbfounded again. We also saw an awesome bulls head wall hanging carved out of wood, so who knows maybe that will be our splurge souvenir to remember this trip. Just wait till you see it, it’s awesome! 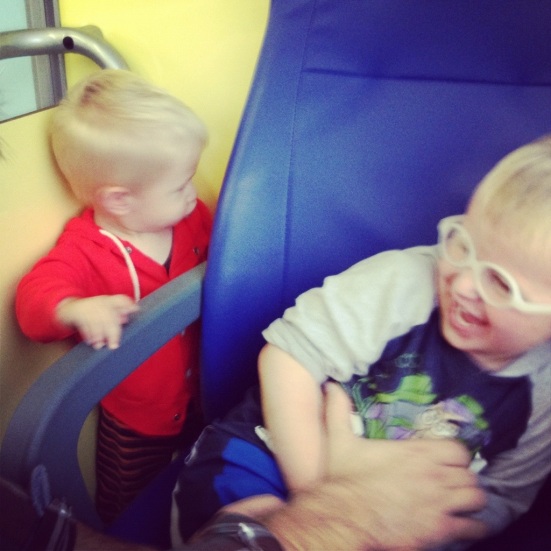 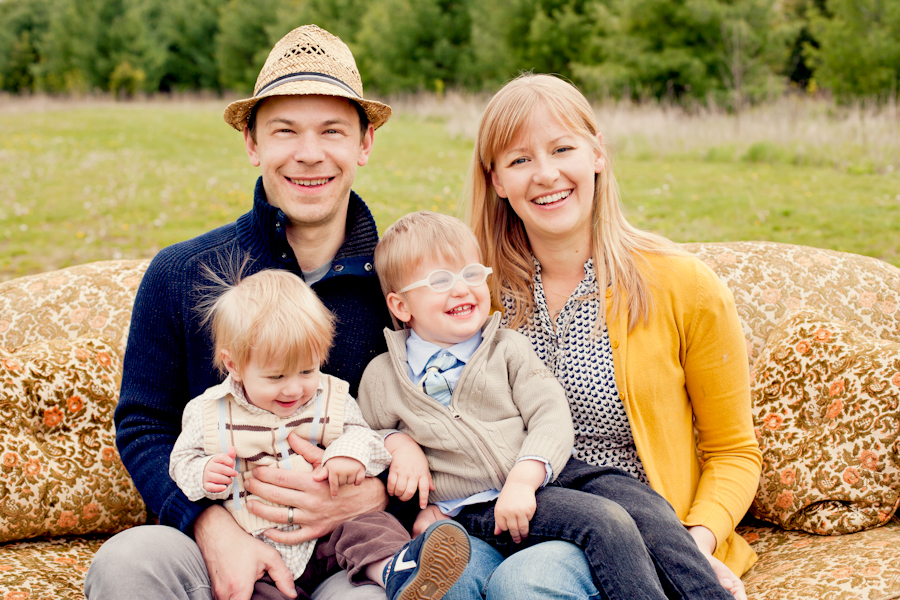